A couple of weeks ago Matt (BiggsIRL) from the Armada blog at http://xwingtactics.blogspot.com/ asked if I'd be interested in playing a game on Vassal that we could both write about on our blogs.  I thought this was a great idea.  He's much more active on his blog than I am and writes some really great stuff, so I certainly don't mind riding in his coattails a bit.


There was really just one problem.  I'd never played a game on Vassal before!  😱

So, I went about getting the software installed and configured, but the realities of life would mean that our game would be my first on Vassal.  No pressure, right?

Just to make things more interesting I decided to break from my usual Rebel gun lines and play some squadron-heavy Imperials. You can read about how I built my list here: How I Build Fleets

Once we got setup for the game I was pleased with my choice.  He was playing a Rebel list similar enough to my usual that it may not have been a really interesting battle report.  I won the roll-off and for some reason chose to go second.  He selected the Most Wanted objective and we started to deploy.  Did you read my post on how I built this fleet?  If so, you know I had a plan that went with this fleet.  Well, as soon as we started deploying all semblance of that plan went straight out the window.  Not that he did anything to mess me up.  I just failed to stick to my plan.

He started with a deployment in the corner.  Forgetting that I didn't want to be flanked, I deployed in the middle expecting him to keep his ships together.  I really did not expect him to split his fleet.  He did.  Oops.  There went a big part of my plan. 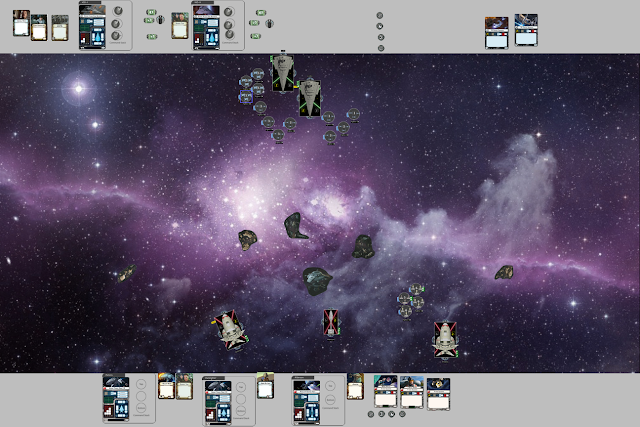 This is where I preceded to make my next mistake.  I declared his Gallant Haven as my Most Wanted target.  It was the furthest ship from me, but figured on heading that way.  Again, I overestimated the mobility of the VSDs.  My plan was to hit the Salvation first, before attacking the Gallant Haven on the right of the board. 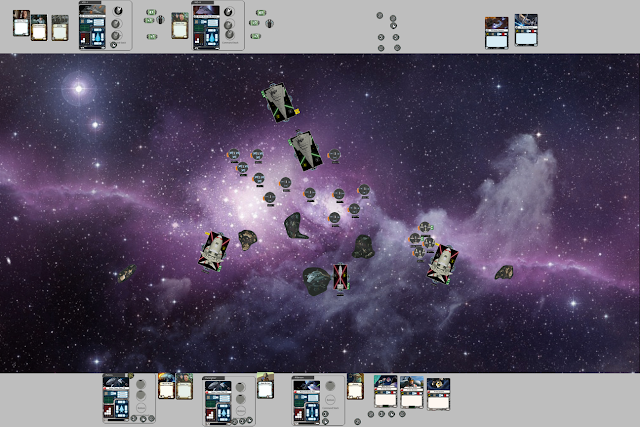 He made a great choice and started kiting the Gallant Haven away from me.  This lead to my final mistake where I hesitated from my plan and straightened out.  Now flying straight between his assault frigates.  I would be able to ill the Salvation, but had no chance at either Assault Frigate now.  Had I stayed committed early on to going after the Gallant Haven I would have had a better chance.  As it was, I never even shot at it.  Wasting my advantage from the Most Wanted objective, while he used the objective to good effect in killing Motti's ship. 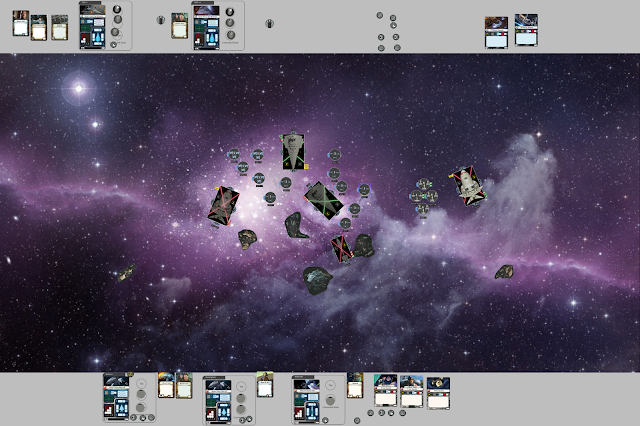 The lead VSD didn't have enough firepower to kill Salvation in one round and the bombers weren't in position to support it.  This lead to it getting more shots on my flagship helping in its demise.  After my intial poor deployment and then indecisive flying I spent most of the game horribly out of position.  He did a great job of capitalizing on my mistakes and making me pay for them.

In the end, I lost my flagship, which was also the objective ship, while only killing his Salvation.  It was a good game and a fun experience, but I wish I had stuck to my plan. 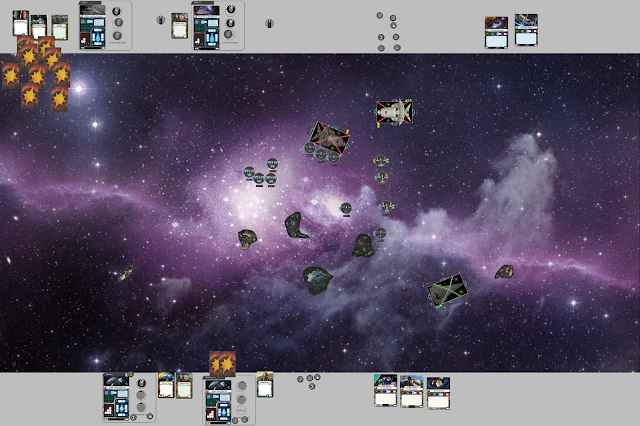 
Even though I lost pretty badly, I do like the fleet and believe it can work.  Look for another battle report from a game played in the real world with this same list tomorrow.  Will I stick to my plan next time???
Posted by shmitty at 9:00 AM